Tony had a clear vision to reduce environmental impact, increase production and transform the housing conditions for his 270 cows. Working with Aztech Buildings to deliver his world class composting barn enabled him to achieve these goals (as well as a few other benifits he didn’t expect along the way.)

During the winter months the paddocks were muddy and messy, and the environment wasn’t pleasant for the cows or aesthetically welcoming for the surrounding neighbours and lifestyle blocks. Tony wanted a way to get the cows off the paddocks to improve their welfare and to enable the paddocks to recover. Finding a solution to this challenge would also enable him to better control and manage nitrogen leaching which can pose a problem in intensive dairy farming and Tony was really committed to try better support the local ecosystem.

After spotting an advertisement for Aztech Buildings in a farming publication – he and his wife Fran decided they wanted to move forward and build a ‘mootel’ for their cows. Happy cows make for a happy dairy farmer, better production and a reduced environmental impact. It seemed like the most logical step forwards.

They contacted Aztech and were delighted to learn that Aztech could meet their design needs, as they didn’t want a standard barn. They had their thoughts turned towards something else entirely. Aztech were chosen on the strength of their design as well as their competitive pricing.

Tony had a clear vision. He wanted an American-style barn with a laneway down the middle. However, his idea was more visionary than that. He wanted a self-composting barn. Something rare and virtually unique in New Zealand. A composting barn design would require a special roof that allowed for the necessary airflow as well as other specific components.

Their transparent and upfront style mean that Tony could relax whilst it started to take shape. They started at Christmas time and only two months later – the main design was completed.

Tony was delighted – but even more importantly – so were the cows!

The Allcock’ barn design includes drainage under the bedding material so the effluent can flow out and into the dairy effluent management system. In practice, there is almost no liquid at all. It is all absorbed into the bedding material and from there the composting process begins. The inclusion of the barn in their management system has required a fundamental shift of farming system for the Allcocks. They have moved from a typical grazing system to one where the cows spend part of every day in the barn and part grazing outside.

The 60m x 41m structure has two completely open areas of 18m x 60m for loafing with a 5m wide feed lane down the centre. Tony uses a 600mm deep layer of sawdust as the bedding material and each cow enjoys an average of 7.7m of space each. Once a year Tony removes the top layer of sawdust which is replaced with a fresh batch. 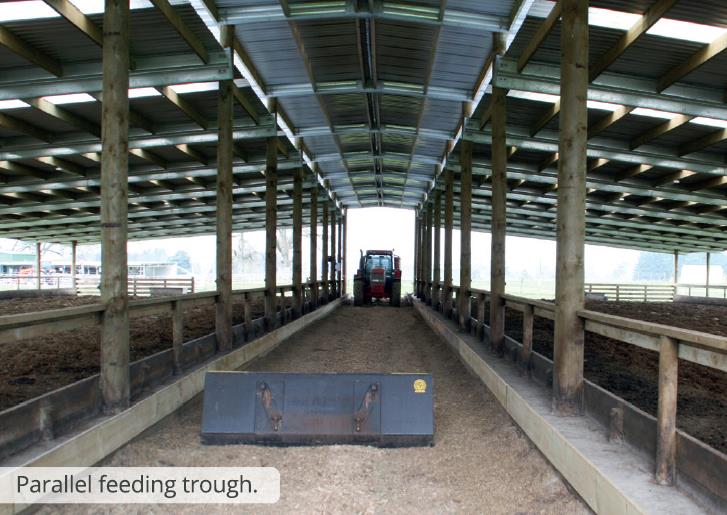 In the winter that followed completion of the build, not a single cow was out in the paddock at night. They were all happily resting inside, enjoying their ‘moo-tel’ conditions. The increase in cow comfort has led to happier cows and in turn, vastly improved feed conversion.

It also made a huge difference to the cows in the summer. Heat stress was a major concern and the cows used the barn to escape the worst of the midday heat. “They just love it in there. Every day they were in there by 12pm. Their production never dropped over the summer, they just carried on which meant huge gains.” The barn also took the pressure off the pastures and meant that by removing the cows from the paddock, they could graze the pasture down to desired level and leave the optimum residual to maximise regrowth.

A major unexpected additional benefit became apparent after the barn had been constructed – the farm no longer buys in conventional fertiliser apart from some starter fert for the maize. The bedding material is removed from the barn and is left for a period to allow the composting process to complete. The fully composted material is then spread on the paddocks as needed. Regular soil tests have shown this practice meets the fertiliser requirements on the farm and has done so for several years now.

Tony agrees that the barn design and installation was a sizeable investment. He also affirms that its already paid for itself. He has grown his own production by 63% without adding a single cow and he attributes it almost entirely to the barn.  Says Tony of the process, ‘everyone should have one of these barns. The barn is a complete package that works well and is easy to manage.’

Nearly all the production increase has come from higher production per cow rather than increased cow numbers. Production per cow has lifted from about 380kgMS to 590kg. Tony asserts that the outcomes have been triple-bottom-line; reducing the nitrogen leaching from cow urine, transforming cow welfare and stacking up as a successful financial investment.

It’s a success story that speaks for itself, as Tony now regularly receives calls from other farmers curious to find out more about the barn installation that Aztech completed.